Vanguard School is a private school in the public interest offering adapted educational services in both languages of instruction (English and French). It provides education to students with learning disabilities within the framework of the regular programs of the ministère de l’Éducation et de l’Enseignement supérieur, both at the elementary and high school levels.

A school devoted to students

Among its particular objectives, the school strives to: 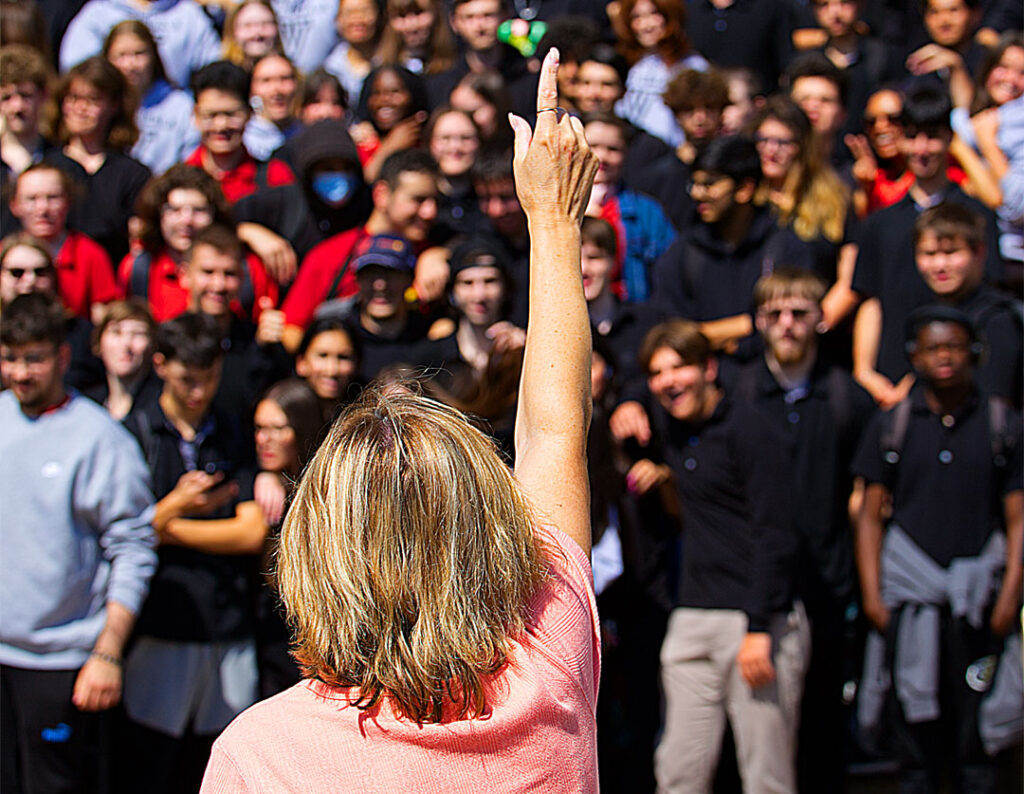 Vanguard School: an innovative educational environment that promotes professional development, research, and the sharing of expertise with the entire educational community.

The School’s mission is to provide each student with learning disabilities with an education that promotes academic success, the development of self-esteem, the achievement of full potential, and harmonious integration into society.

Vanguard School aspires to be recognized as a centre of excellence in special education through the quality of services it provides to students, a human and caring environment, the expertise developed by its staff, the modernity of its facilities, and the importance of research and training for and with its partners.

Our goal is to make a difference and promote the overall success of each of our students.

Each of us in our own way.

We carry out daily actions centred on these objectives because we believe that all students can learn if we give them the necessary conditions, i.e., the time, the support, and the tools to do so.

Woven by the desire to make a difference

The School, the Development Fund (the Foundation), and the Alumni: a history woven by the same desire to make a difference for students with learning disabilities.

The initial project that led to the creation of Vanguard School Quebec Ltd. in 1973 was a parent’s search for a school offering adapted and appropriate services for students with learning disabilities.

That parent was Mr. Paul E. Zimmerman, who, due to the lack of adapted educational services in the Montreal area, had sent his son to continue his studies in a Vanguard school in the United States.

In response to the lack of adapted educational services and inspired by his son’s experience in the United States, Mr. Zimmerman, in collaboration with Dr. Samuel Rabinovitch of the McGill University Learning Centre and the Montreal Children’s Hospital, developed the Vanguard School project in Montreal. The school was to provide adapted services to Quebec students with learning disabilities in both French and English schools.

To make the project possible, the expertise of the American Vanguard School was called upon to guide and support the implementation of the project. The advice and support of the Commission des Écoles Protestantes du Grand Montréal (CEPGM) were sought. In the beginning, the academic community was also called upon to collaborate through the presence of a representative from McGill University. Financial contributions were also sought from private companies operating in Quebec to support the school materially.

The first school opened by the Vanguard School Corporation was the Intercultural Elementary in 1973. From the beginning, this small school located in Cartierville has been a reflection of Montreal society, welcoming about thirty elementary students from the two main linguistic communities of the Montreal area. Educational services were offered by the staff in their mother tongue.

The School was subsequently moved to 1150 Deguire Street in 1988 to serve a larger number of students. During those years, the School was noted for the high quality of its innovative educational approaches, including strategic teaching.

Even today, our students benefit daily from this expertise, which contributes more than ever to the reputation of Vanguard School and its overall success.

The English High School was also created in the mid-1980s. It was set up on the premises of Westmount High School, located in Westmount, Quebec. This program, under the name “Project School,” welcomed 12 students in grade 7. It was designed jointly by the Lansdowne Center, the Learning Center of Quebec, and Vanguard School.

1992: In September 1992, Vanguard officially opened its Vanguard Intercultural High School with the purchase of a building located at 175 Metcalfe Street in Westmount, Quebec. This purchase allowed the English High School sector to join the school.

This multilingual school quickly made its mark through the sustained commitment of its staff to provide quality specialized instruction to meet the needs of all students from grades 7 to 11.

The school was also creative in encouraging the emergence of special programs, including Interval, a small catering business dedicated to some 20 students who wanted to develop their employability but were not able to pursue regular schooling.

Considering the limitations and aging of the three facilities, the 2010–2013 Vanguard Strategic Plan included the relocation of its facilities to a single location.

2012: In September 2012, the Vanguard School Corporation acquired a building located at 5935 Côte-de-Liesse Road in Saint-Laurent. The facility was designed to maintain a personalized environment for elementary and secondary students while allowing for the future expansion of its clientele in all elementary and high school cycles.

2013: In March 2013, the first students to move into this facility were the elementary students, and in September 2013, the high school students joined them, bringing all students together in this new facility.

In addition to the classrooms, Vanguard School also welcomes:

THE BUILDING’S CONSTRUCTION ON COTE-DE-LIESSE

Vanguard School dedication ceremony in its new facility in 2013

In 1975, two years after the opening of the first school, the promoters of the project set up a foundation, Nouveaux Horizons/The New Horizons Foundation, whose mission was to raise funds for the development of the school. At that time, the funds raised were mainly dedicated to the survival and operation of the school.

The Vanguard Foundation is a non-profit organization whose mission is to raise funds to support the School’s projects and help it achieve its mission for students with learning disabilities.

This section is under construction.

This section is under construction.